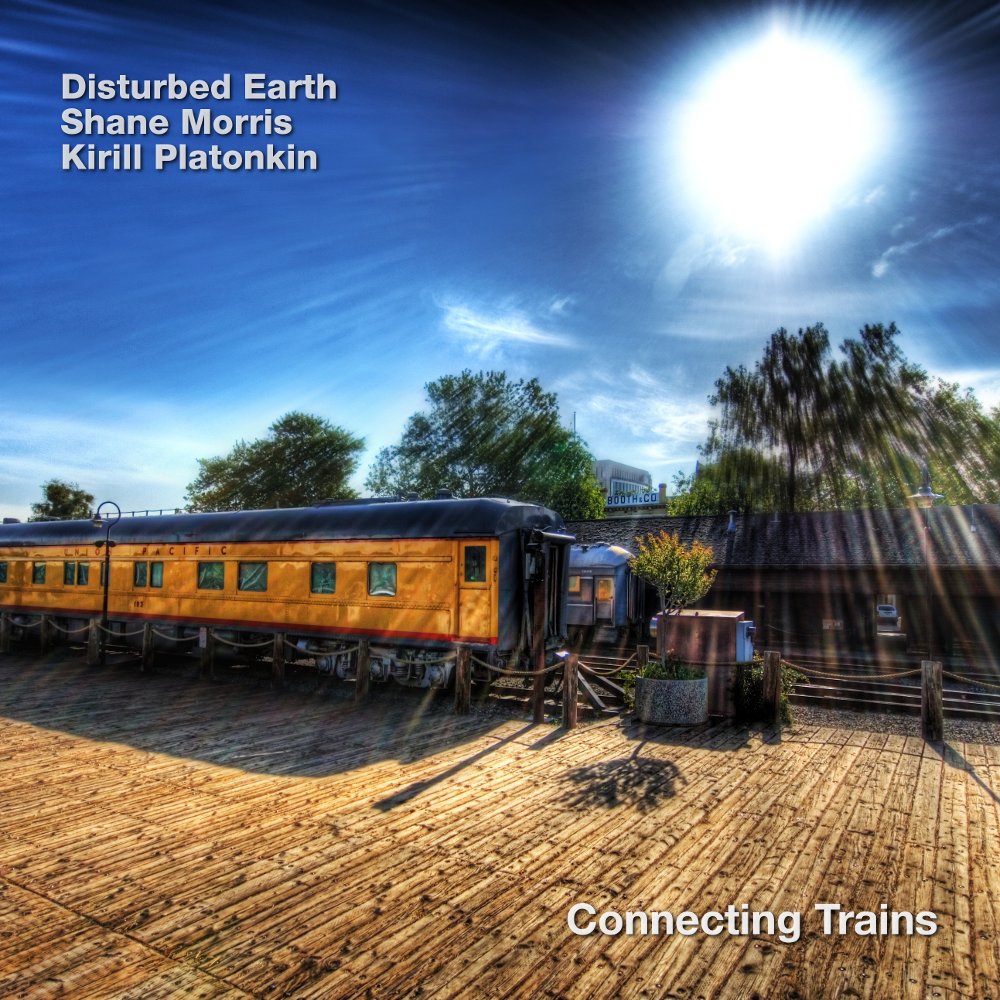 1. Rolling Stock Kirill Platonkin: Train Field Recordings Shane Morris: Marsynth Morris Box Disturbed Earth: Acoustic Guitar, Harmonica, Reel to Reel Tape Loop System, Frog & Bird Field Recordings, Sample Manipulation, Production/Structure 2. Absolute Signal Kirill Platonkin: Overtone Singing Shane Morris: Marsynth Morris Box, Gongs, Electric Guitar Disturbed Earth: Electric Guitar, Reel to Reel Tape Loop System, Sample Manipulation, Production/Structure 3. Suddenly Somewhere Kirill Platonkin: Overtone Singing, Guitar Drone, VST Organ, Push-bike Wheel Spokes played with an Ebow and recorded with Vsevolod Botvinnik (Timoneus) Shane Morris: Tibetan Bells, Percussion, Absynth, Reactor, Marsynth Morris Box, Train Field Recording Disturbed Earth: Acoustic Guitar, Pedal Harmonium, Guitar Synth,Train Field Recording, Reel to Reel Tape Loop System, Sample Manipulation, Production/Structure Words about the album “Connecting Trains” from emails... Shane Morris “Since it's been an ongoing process for a while, I am probably forgetting an instrument or two Dean. Maybe some other percussions? Guitar? If you know of some others I sent you apart from these listed, then please feel free to add them. Heh, also listening to the tracks doesn't help me decipher the instrumentation better at all.. in fact probably makes it more challenging as it's a such swirling mix of things and your processing of it all just seems to have transformed whatever I sent you into something else :-) Very excited about this album with you gentlemen. This is truly a worldly collaboration.” Kirill Platonkin “I'm from Russia, Amur Region, city - Blagoveshchensk - yeah, we're from different corners of the world :-) As for some words about this album: It was a fantastic pleasure to work together with such great folks as Dean and Shane - and I am deeply grateful to them for such a nice company. I would like to devote this album to international friendship, and to the fact, that nowadays distances don't interfere with good friendly relations between people.” Disturbed Earth “I met both Shane and Kirill via the Stillstream chatroom at different times...and shared a closeness/empathy immediately. When putting this album together, I asked for some samples--or whatever Shane and Kirill were thinking/feeling about at the time, totally free and random. I wanted this to be a discovery of where the three of us could go with VERY little. What I received were their intuitive knowledge of the “unknown”...instrumentation as individual and professional, as their own albums, as they are such accomplished solo artists. That “unknown” has produced this album titled “Connecting Trains”... From various places on this earth, Russia, the U.S. and Australia we connected trains of thought...maybe we will travel and meet each other at some station, for now it is “suddenly somewhere.” Thanks to John Tocher and Ayn Morgan for the cover, their patience and for the release!!!

They danced down the streets like dingledodies, and I shambled after as I've been doing all my life after people who interest me, because the only people for me are the mad ones, the ones who are mad to live, mad to talk, mad to be saved, desirous of everything at the same time, the ones who never yawn or say a commonplace thing, but burn, burn, burn like fabulous yellow roman candles exploding like spiders across the stars and in the middle you see the blue centerlight pop and everybody goes "Awww!"